Jacob Pynas was one of the painters now known as the Pre-Rembrandtists. He was born in Haarlem, and was likely first trained under his older brother Jan. In 1605, Pynas went to Italy with Pieter Lastman, where he was influenced by the work of German painter Adam Elsheimer, a resident of Rome from 1600-1610. Pynas was active, primarily in Delft, as a painter of Old and New Testament scenes. He is recorded as a member of the Guild of St. Luke in 1632 and as resident of Delft in 1639. The Stoning of St. Stephen owes its compositional arrangement to a painting of Elsheimer’s of 1603-1604. In his version, Pynas reduces the number of figures, depicts them fully clothed and adds the temple of the Sibyl at Tivoli in the upper right hand corner, in place of Elsheimer’s vaulted ruins. Jacob Pynas was a teacher of Rembrandt’s from 1623-1624, and his influence can be seen in Rembrandt’s Stoning of St. Stephen of 1625. 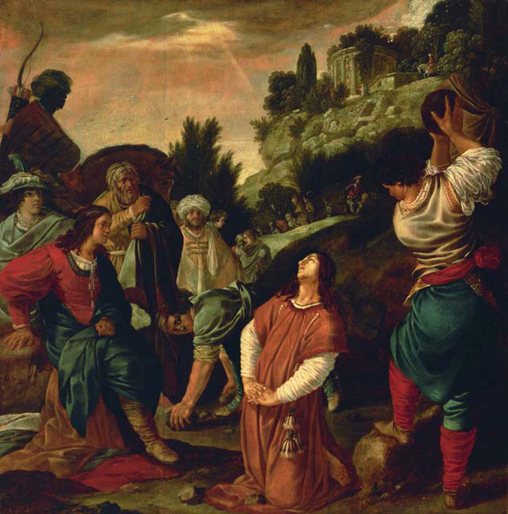