Wednesday 30 November
6°C and Moderate Rain
Agnes will open at 10:00 am today.

Govert Flinck was born in Cleve and first studied with Lambert Jacobsz. in Leeuwarden. He entered the workshop of Hendrick Uylenburgh around 1635, where he studied under Rembrandt and his early work is greatly indebted to the master. Flinck is known as a painter of biblical subjects, portraits, allegories and histories. He rose to the pinnacle of patronage in Amsterdam, and died suddenly. The Sacrifice of Manoah is a significant example of Flinck’s work while he was still fully under Rembrandt’s influence. The Old Testament subject had been depicted earlier by Pieter Lastman and Claes Moeyart. The story tells of the barren wife of Manoah being visited by an angel who tells her she will bear a son who will deliver Israel out of the Land of the Philistines. The angel visited a second time at the insistence of the skeptical husband, and the painting depicts the revelation of the angel’s divinity, as he rises in the smoke of Manoah’s sacrifice to God. Flinck derives his compositional arrangement from a drawing of the same subject by Rembrandt, and the figure of the angel from Rembrandt’s painting The Angel Leaving Tobias and his Family. Rembrandt, in turn had borrowed the dramatic figure of the departing angel from a woodcut by Maerten van Heemskerck. 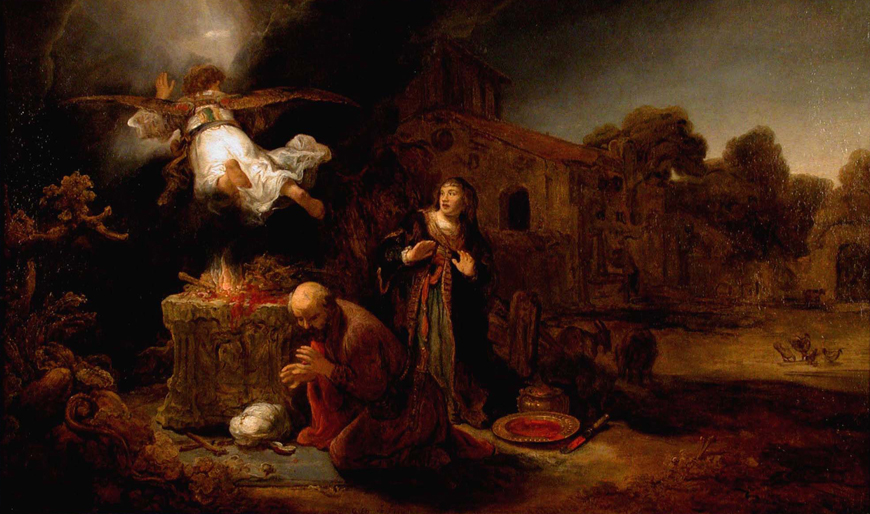