Camille Pissarro was arguably the most committed of the Impressionist painters, exhibiting at all eight of the movement’s independent exhibitions. He was similarly engaged socially: unlike his more urbane colleagues, Pissarro identified himself with the land and with its peasant workers, and supported the political left in its defence of the labouring classes. Like the Barbizon painter Jean-François Millet before him, Pissarro saw in the rural worker a timeless emblem of the value of labour and nature, so that his images are at once narrative and polemical, at least to the degree that they celebrate the dignity and worth of work on the land. Pissarro began printmaking in 1862 and for some years worked closely with Edgar Degas; the etchings they each produced during that period are among the most breathtaking and innovative of the nineteenth century. The Haymakers is a deceptively simple image, whose tonal contrasts and sensitive lines are the product of immense skill. 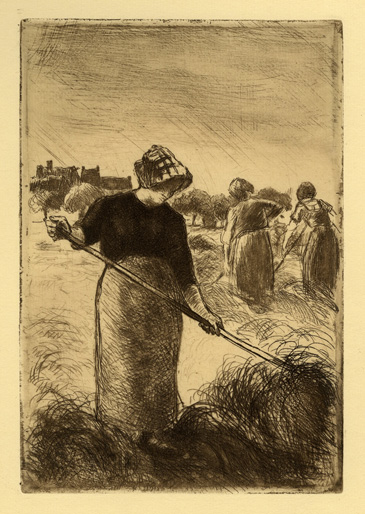