Jean-François Millet’s work is commonly associated with French Realism. Millet first trained with Bon Dumouchel, a portrait painter in Cherbourg, and later entered the École des Beaux-Arts where he studied under history painter Paul Delaroche. Early in his career he earned his living as a portrait and genre painter, sending paintings to the Salon on a regular basis. In 1849, for fear of disease brought on by overcrowding in Paris, Millet moved his family to Barbizon, where he remained for the rest of his life. It was in Barbizon that Millet, who had already demonstrated an inclination toward the working class as subject matter, fully turned towards the labour of rural life in his painting and drawing. Millet was a master draftsman and produced both quick sketches on the spot and more fully developed drawings to be sold as finished works. The Forrester is a study, probably in preparation for The Wood-Sawyers in London’s Victoria and Albert Museum. In this sketch, Millet depicts the strength of the sawyer, with his axe raised in the air. He repeats the figure in two places. 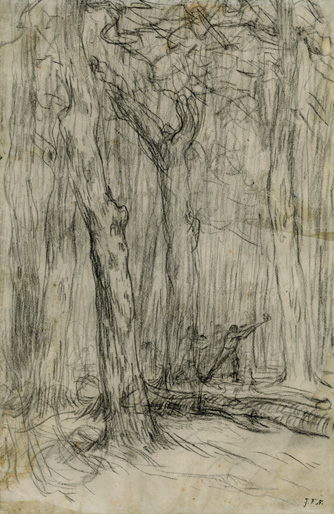