Karel van der Pluym was born to a prominent family in Leiden in 1625 and probably studied with Rembrandt, his distant cousin, in the 1640s. Still an obscure figure, it is known that Van de Pluym was a member of the painters’ guild in Leiden upon its foundation and was head of the guild in 1652 and 1653. The influence of Rembrandt can be clearly seen in the brushwork, handling of light and arrangement of figures in The Dismissal of Hagar. The subject is a popular one in Rembrandt’s circle. Hagar, having been Abraham’s concubine had a child named Ishmael who was to serve as an heir. Then Abraham’s wife Sarah, formerly thought barren, bore her own child, Isaac, and after seeing him insulted by Ishmael, she insisted that Abraham banish Hagar and Ishmael. The scene depicted is the moment that Abraham turns Hagar and Ishmael out the house. The peacock to the right of Hagar is a biting allusion to her pride. 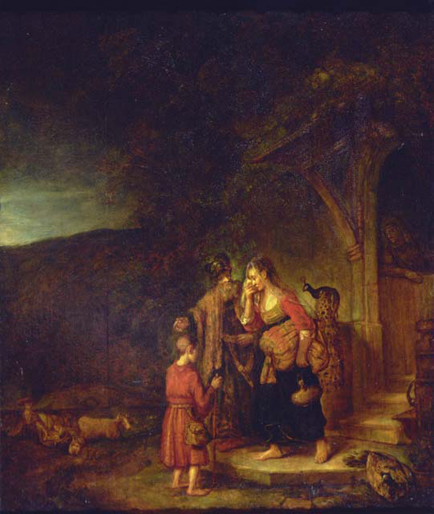