Although Odilon Redon is associated with the Symbolists as well as the Nabis, it is difficult to situate his highly personal imagery within any single movement or style. He studied art in the classes of academician Jean-Léon Gérôme but in his graphic work was decisively influenced by his encounter with the printmaker Rodolphe Bresdin, from whom he learned etching and lithography. Redon began publishing lithographs in 1879. His imagery is complex, in some cases inspired by textual sources, in others apparently emerging from a dream-like space within his own imagination. The Buddha was included in an installment of André Marty’s L’Estampe Originale portfolio in 1895. It demonstrates Redon’s interest in the connections between Christian and Eastern religions, particularly those between Christ and Buddha. 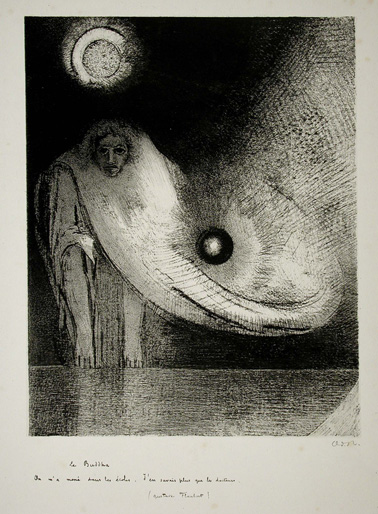