Goya’s career spanned a tumultuous period of Spanish history, marked by reform and repression, foreign occupation, war, civil disruption and economic devastation. Though he is rightly seen as a pitiless critic of the political and social ills of his day, Goya was also much favoured by the Spanish court and aristocracy. The Certainly is Being able to Read, from Goya’s famed Los Caprichos etchings, was published the year he was named First Painter to the King, and corresponds to a brief period of cultural liberality. In the series, he mocked – often harshly – human folly in a manner both socially and aesthetically controversial. Years later, the French poet and critic Charles Baudelaire described Los Caprichos as “giving monstrosity the ring of truth.” 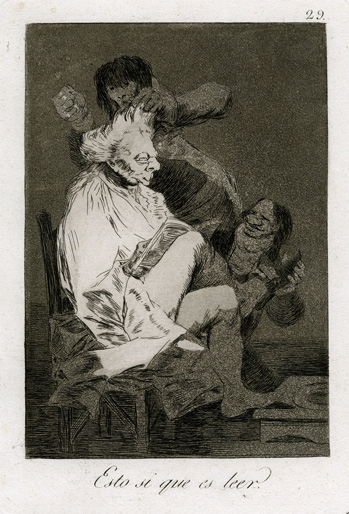