The earliest work in the current exhibition, this painting illustrates the schematic power of Elizabethan portraiture. Rigid and expressionless, the sitter acts as a two-dimensional counterpart of tomb effigies. In the second half of the sixteenth century, English portraits commonly showed a stiff figure turned three-quarters to the left or right. Such representations were firmly rooted in the traditions of medieval craftsmanship. They were relatively unrefined; and the artists and sitters involved have remained almost entirely anonymous to modern scholarship. – Gallery label: Dr Maxime Valsamas, Curator of From Tudor to Hanover: British Portraits, 1590–1800 The stiff presentation, restrained dress, and simple green background led previous owners to attribute this painting to the school of Lucas Cranach the Elder (1472-1553). Cranach’s workshop was known for individualizing depictions of Saxon princes and religious leaders executed in bust- or half-length with colourful backgrounds and without conventional attributes of power and rank. Yet Cranach’s exacting details and finely modeled faces distinguish the works of the master from this painting. The association of this portrait with English origins stems from the Latin inscription and the vegetal black-and-white collar and cuff decoration, both of which appear in Tudor portraits of the second half of the 16th century. 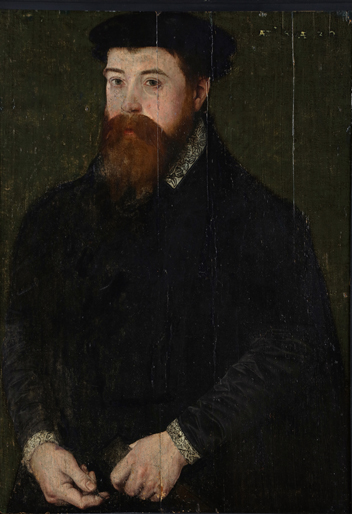