Bertram Brooker was born in Croydon, England and immigrated to Canada in 1905, settling in Portage-la-Prairie. He took on many different jobs, including the operation of a movie theatre and journalism before turning seriously to painting in 1926. He is credited with being the first Canadian artist to have produced abstract compositions. After achieving recognition for his artwork and exhibiting with the Group of Seven in 1928, Brooker continued a newspaper column, worked in advertising and published a novel. In 1929, Brooker met L.L. Fitzgerald in Winnipeg, an encounter that influenced him to abandon “pure” abstraction in favor of representational painting. Parasol, painted around 1930, demonstrates the influence of Fitzgerald. In this work, Brooker uses an everyday object as a tool for his exploration of formal concerns. 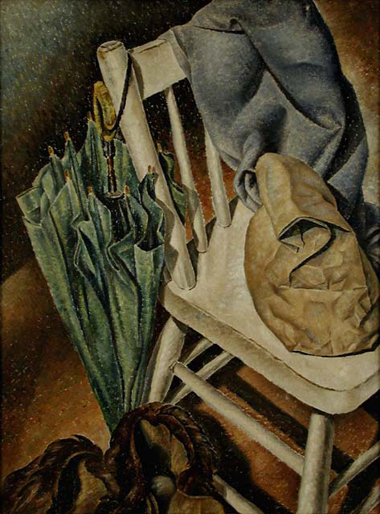