André Biéler (1896-1989) played an important role in the history of art in Canada and had a significant impact on the arts in Kingston and at Queen’s University over a period of fifty years. In 1936, Biéler became artist-in-residence at Queen’s University. He remained at Queen’s until his retirement in 1964 as founding head of the Department of Art and founding director of the Art Centre. Biéler was a respected artist, popular teacher and is remembered with affection by the Kingston community. Biéler was born in Lausanne, Switzerland and came to Canada with his family in 1908. He studied at the Art Students’ League in Woodstock, New York, for a time but was decisively influenced by the five years he spent in Europe from 1921-1926.The effect of a first hand acquaintance with the art of Cézanne and the Post-Impressionists can be clearly seen in his work of this period. Upon returning to Canada in 1926, Biéler, who had been abroad during the Group of Seven’s rise to prominence, turned to rural Quebec for subject matter. In 1927 he set up a studio in the village of Sainte-Famille on Ile d’Orleans and began to paint the surrounding landscape and its inhabitants. People and social interaction remained the focus of his subject matter for the rest of his life. 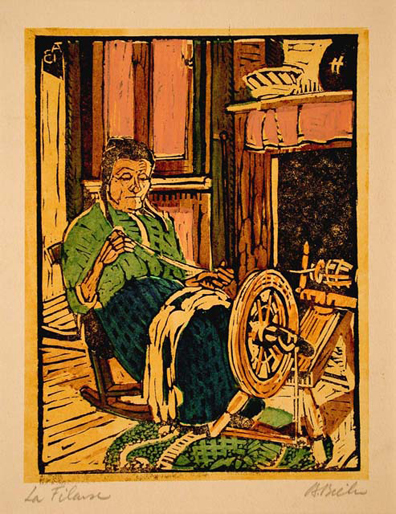