J.W. Morrice is an artist of enormous significance for Canada. A native of Montreal, he left Canada for Paris in 1889 and remained an expatriate, although he continued to visit regularly, sent art for exhibition and joined the Canadian Art Club upon its formation in 1907. In Paris, Morrice was known among a group of English-speaking expatriates from the United States and England including, at various times, artists Maurice Prendergast, Charles Condor and Robert Henri, writers Somerset Maugham and Arnold Bennett and critic Clive Bell. He also maintained close relationships with Canadian artists such as Edmund Morris, and Maurice Cullen. Morrice was seldom in one place for long, travelling extensively through Europe, the Caribbean, Morocco, Algeria and Tunisia. The influence of Post-Impressionism, Matisse and especially Whistler can be seen in his work, but his sensitive brushwork, exquisite sense of colour and lyrical compositions are uniquely his own. Morrice valued highly his sketches, such as this one, and considered them finished works in themselves, frequently exhibiting them. 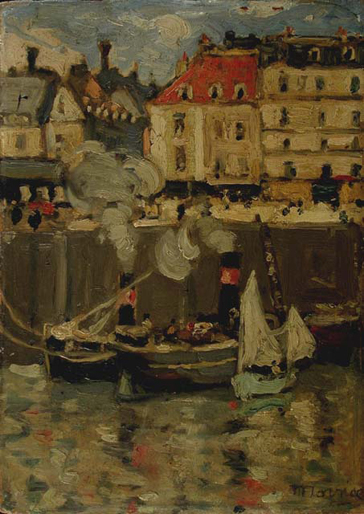