Got Anything To Eat Mister? depicts two hungry children with their grandmother in the doorway of a farmhouse. The landscape surrounding them reveals agricultural crisis.A native of Manchester, England, Leonard Hutchison studied at the Colchester School of Art and immigrated to Canada in 1913. Hutchison used his art as a tool for social awareness and change. Following service in WW I, he settled at Hamilton, Ontario, where he worked as a teacher and commercial artist. During the years of the Great Depression in the 1930s, his graphic work depicted intense human suffering, but also the resilience of the rural and labouring classes. The woodcut medium, suited ideally to Hutchison’s expressive use of line, was an inexpensive form of art that he hoped would be accessible to the average person. 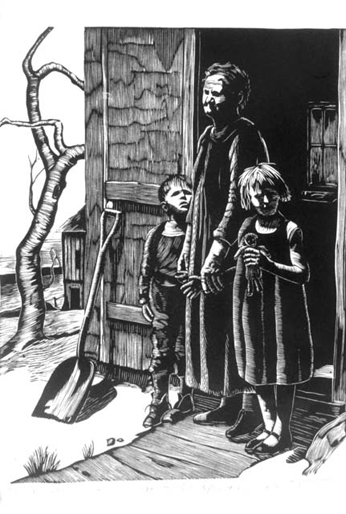