Richard Parkes Bonington established himself as a significant landscape artist despite his untimely death at the age of 26, and his scant production forged a critical link between nineteenth-century French and English painting. Born into an artistic family near Nottingham, Bonington moved to Calais in 1817, where he studied under Louis Francia. In 1818 he left for Paris, entering the studio of the famed Neo-Classical painter Baron Gros in 1820, and befriending several of the young Romantics, such as Delacroix, whose studio he shared for a time. A trip to Italy in 1826 supplied Bonington with the inspiration for some of his greatest paintings and watercolours. This view of a street in Bologna is his only etching. Only two impressions of the first state, both in the British Museum, are known. Because it was etched too lightly for publication, the plate was re-worked, and a sky was added, after the artist’s death. 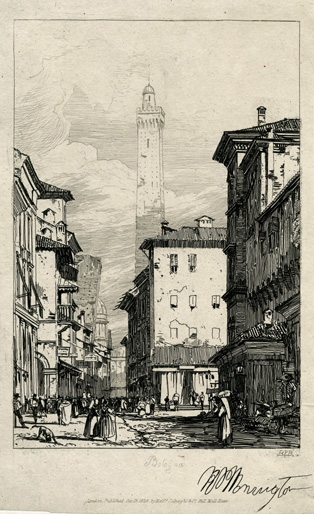