Michiel Sweerts is a figure whose early life remains virtually unknown to scholars. Born in Brussels, Sweerts traveled to Rome in 1646 where he became associated with the Accademia di San Luca and Virtuosi del Pantheon. He fell under the influence of the Dutch genre painter Pieter van Laer (called Bamboccio). His resulting scenes of everyday life are characterized by their strong emotional impact, attention to light effects and a classicising calm. In 1656, Sweerts founded an academy of design in Brussels, and upon the failure of this venture, moved to Amsterdam. In 1660 he joined a French missionary expedition to the East and, following his expulsion joined the Portugese in Goa, India, where he died in 1664. A Peasant Holding a Wine Jug (of which there is another version in the Galleria dell’ Accademia Nazionale di San Luca) demonstrates Sweerts’ simplified approach to genre painting in his focus on two figures, a man and a boy, bathed in light before a darkened wine cellar in the background. 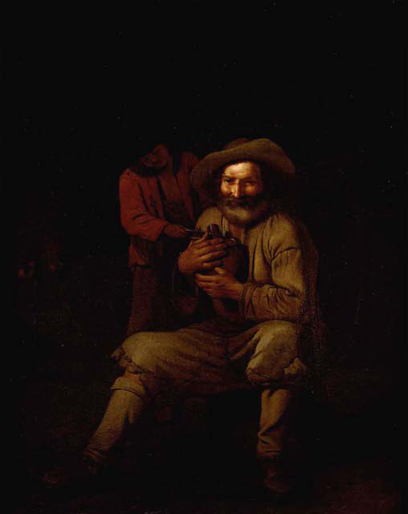