In an age when Facebook and Twitter are synonymous with social networking, it’s easy to forget that social networks — as a concept — are nothing new. Centuries before YouTube, Instagram, and their counterparts made their debut, Dutch artist Rembrandt van Rijn (1606–1669) was deeply immersed in a social network of his own.

The connections between Rembrandt and his contemporaries are explored in Rembrandt’s Circle: Making History, an exhibition on view at the Agnes Etherington Art Centre in Kingston, Ontario. The exhibition consists of 26 paintings created by Dutch artists between approximately 1620 and 1720 — the prosperous Dutch Golden Age — and showcases a variety of historical moments depicted by Rembrandt’s teachers, students, and colleagues.

“This theme allows students and the public to explore how artists bring stories to life — like the director or set designer of a film — by making decisions about which dramatic moment to choose; how to stage it with lighting, costume, scenery; how the figures will interact; and especially how they will express the emotions behind the story,” says Dr. Stephanie Dickey, Bader Chair in Northern Baroque Art at Queen’s University, who curated the show with a group of advanced students from the university. 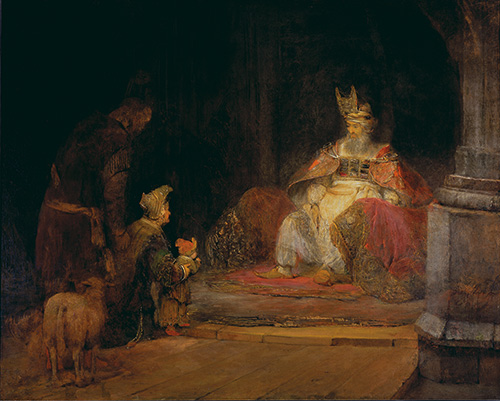 The exhibition begins by introducing audiences to Rembrandt’s mentors and the legendary artist himself. The show includes two of Rembrandt’s paintings: Head of an Old Man in a Cap (c. 1630) and Head of a Man in a Turban (Study for a Rabbi?) (c. 1661). “They are both small studies of heads, not history paintings, but they are included in the show because Rembrandt is the centre of the ‘circle’,” Dickey says. “His approach to history painting inspired and challenged the other artists shown here.” Among the eighteen artists included in the show are Aert de Gelder (1645–1727), Govert Flinck (1615–1660), and Philips Koninck (1619–1688).

The second section of the exhibition explores themes inspired by mythology and the Bible. “The stories depicted are easy to relate to on a human level — I think that is why they continue to interest artists and writers centuries later,” Dickey says. “The emotions and human relationships they explore are really elemental.” Stories from the Old and New Testaments figure prominently in many of the works featured in Rembrandt’s Circle. 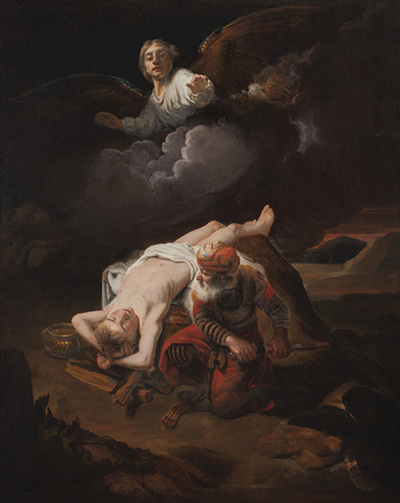 “One cluster of works shows that Dutch artists were fascinated with angelic apparitions: moments when divine intervention suddenly transforms the lives of ordinary human beings,” Dickey says, elaborating on the exhibition’s Biblical themes. Abraham’s Sacrifice of Isaac by Nicolaes Maes(1634–1693), who was Rembrandt’s student in the late 1640s, is an example of this trend. The painting depicts a scene from the Old Testament, in which God tests Abraham by asking him to sacrifice his son Isaac. At the last second, an angel appears and Isaac’s life is saved.

Maes’ version of the scene reflects Rembrandt’s expressive use of light and colour, but is a unique portrayal nonetheless. “I especially like the way the angel looks straight out of the canvas, drawing us into the story,” Dickey says. “This painting sums up what the show is all about: historical narrative, drama, emotion, and the impact of Rembrandt.” 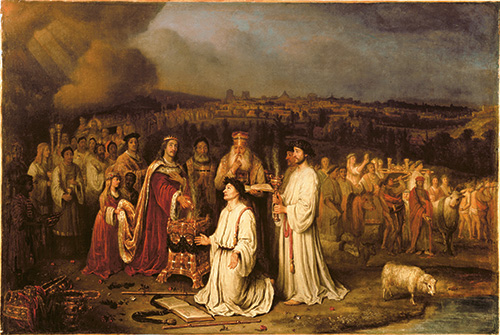 Philips Koninck, King Solomon Dedicating the Temple outside Jerusalem (circa 1664), oil on canvas. Collection of Alfred and Isabel Bader, Milwaukee

The idea of a social network is embedded not only in the exhibition’s collection of works, but also in the exhibition’s development. Rembrandt and his contemporaries were brought to life through a collaboration between a teacher and her students, with each party contributing to the show’s research and design. Just as Rembrandt and his students learned from each other, so too did Dickey and hers. The paintings mounted on the walls of the Agnes Etherington Art Centre forRembrandt’s Circle: Making History are worth viewing not only for the skill they demonstrate, but also the reminder they provide of the value of working together to create a masterpiece.